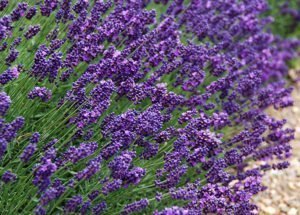 Lavender is a very easy plant to propagate by taking cuttings from mature plants that are sending out new shoots.  It’s also very forgiving.  A lavender “start” (a cutting that has been rooted in a seed-starting soil pod) can go right into your garden as soon as the chance of frost has past.  However, a small start will take quite a while to grow to its full potential.

If you want to get a head start on the season, you can re-pot a start into a larger (1-gallon) plastic pot and encourage rapid growth and root development in the winter months (just like starting your tomato plants in February!).  When the young plants get a bigger container in which to spread out, the results will be a larger, ready-to-bloom plant far sooner.

The process of re-potting is very simple and definitely worth the time.

The first trick to getting a big lavender out of a little lavender is the potting medium.  Most residential potting soil is designed to hold water and moisture (which most plants like); however lavender really hates “wet feet” and drowning is one of the most common causes of young lavender death.  So we recommend combining a potting soil (we use an organic mixture designed for bushes) with a small amount of sand.  We use a 20:1 combination of soil to sand.  This really helps form a medium that is much better suited for lavenders.

Starting with a clean 1-gallon plastic pot, you should fill the container about 2/3s to the top.  You want the final plant to be about 1/3 its volume below the rim of the pot, so you’ll want to check the start to make sure the base soil isn’t too high or too low.

The propagated starts should have had enough time to develop a significant root system in the soil pod.  Sometimes a young start will look very healthy, but if it doesn’t have a good root network in place, it will be much less likely to survive when transferred outdoors.  The roots should definitely have broken through the pod before transplanting.

Water the start pods well the day before transplanting to the larger pot.

Next place the start pod gently in the center of the pot (now filled 2/3s to the top.)  Be careful not to press the start down too aggressively to avoid damaging the young roots.

Fill around the start adding enough of the soil/sand mixture to just reach the top of the pod.  (When you water, you may find that you need to add more mixture to make sure the pod isn’t sticking way above the soil line in the pot.)

The final potted plant should be watered right away.  After the initial watering, the new transplanted pot should be kept in a warm sunny place until the frost danger has passed.  The new potted lavender should be watered only once a week or if the new plant looks slightly wilted.  Once again, over watering is not desirable.

After the frosts have passed, the new pots should be set out in the sun to become acclimated to the natural environment.  Whether the pots are inside or outside, they should be given at least three months to fill the new pot with strong roots.  If you try to plant these too soon, you’ll find that you’ve just got the start and a lot of potting soil—which defeats the whole process.  The root system expansion is the key to getting a wonderful, large, fragrant plant much earlier than planting a small start.